Voting on a Verdict

Voting on a Verdict

The participants are split into two groups of seven people and they work in separate spaces. Two or three people are observers in each group (depending on the total number of participants). Slowly and clearly read the story about the context for the exercise, at least twice.

“You are two rival humanitarian organisations working with children. Both your organisations currently work on multiple important projects planned for the upcoming two years (one of the main projects is procurement of aids for children with disabilities). One officer from each of the two organisations has been arrested for using the privileges given to humanitarian organisations for personal gain (evasion of customs taxes). Importing technical equipment was at issue. All the other employees (all of you) knew about this but turned a blind eye. The public prosecutor suspects that the two officers cooperated in these illegal activities.

You are faced with the question: Is your organisation guilty as a whole?

The group votes by secret ballot and the decision is made by simple majority vote.”

The two groups then go work in separate spaces. It is important that they are in different room so that they cannot overhear each other.

It is explained to each group that the outcome of the vote on whether they are guilty as an organisation will have different illustrates the different outcomes: 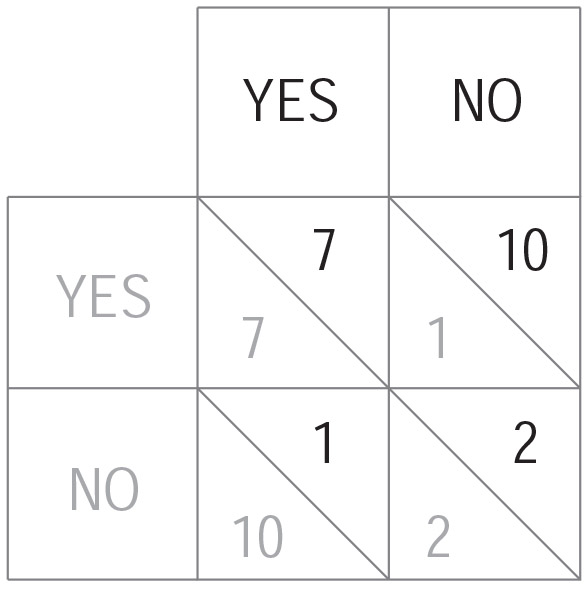 1st round: Everyone receives a ballot paper to enter their vote (“Guilty” or “Not Guilty”). Everyone votes individually, without consultations within the group. The trainer delivers the verdict based on the results of the vote on both groups (to each group) and the corresponding punishment, as well as specifically how the other group voted. She writes this on the chart on the flipchart paper.

Example chart for recording the votes:

Each group receives a copy of the chart.

2nd round: Voting takes place again without prior consultation and the results are given to both groups. Only then does each group get five minutes to confer and nominate a negotiator to go negotiate with the other group. After negotiations, they again have a short time (two minutes or so) to confer within the group and then they vote. The trainer again delivers the verdict based on the results of the vote of both groups (to each group) and the corresponding punishment, as well as specifically how the other group voted. If from this point the voting results remain the same three times in a row and the same sanction is pronounced, whatever the ration of votes, the exercise ends.

How did you vote? How satisfied are you with the result?

How satisfied are you with the process? What did the observers notice?

Implementing this exercise may be complicated due to the sequencing of steps. It is recommended that you lead the exercise only after you’ve had the opportunity to assist a trainer with experience in implementing this exercise. Those who do decide to use this exercise usually find that it becomes indispensable for discussing teamwork, cooperation, leadership and communication because of the material it offers. The participants find it fairly easy to take on their roles, because the story is close enough to real life and not unfamiliar. Because moral dilemmas appear at various levels, it is almost impossible for the process and for consultations within the groups, and especially negotiations with the other group to go smoothly. This also provides ample material for analysing teamwork and communication. However, often the moral dilemmas are sidelined and competition with the other group takes centre stage. In a brief time, this exercise gives us a snapshot of how peer pressure functions, how we communicate with others when we have polarised opinions, how easily we overlook people on our team, how we take the path of least resistance or how we are defiant, the image we create of the other group, etc. The exercise can elicit strong emotional reactions, primarily of frustration, so the evaluation should be conducted carefully and skilfully in order for people to emerge from it with a feeling that it was worth getting upset because they learned so much. It is very important that the evaluation does not leave the impression that one group was morally superior to the other and that insights into displayed weaknesses leave enough room to hearing out, understanding and accepting criticism.